Tony Chong
A Southern California native, I have a degree in history and a love of aerospace. I took up photography as a research tool for my job and fell in love with the medium. I plan to share some of my work here and hope you enjoy it. 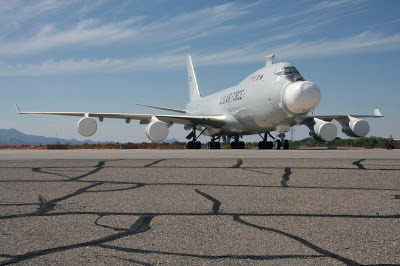 This was perhaps the most frustrating program to try and write an article about, even for an in-house publication. Two or three times over the past six years Diane, my editor, and I tried to see about doing a piece on this system without success. The problem was more the multiple jurisdictions involved than anything else. While it was a Northrop Grumman laser, it was a Boeing aircraft with a large Lockheed Martin contribution, all done for the Air Force via the Missile Defense Agency on a very sensitive subject. As a result, getting all the responsible parties to agree on a special press junket for our limited-reach publication proved impossible. Ironically it took cancellation of the program to open the door to an article.

When we found out the aircraft was going to be displayed at the Davis-Monthan Air Force Base open house in 2012, with the possibility of it being cut up shortly thereafter, we knew we had to act fast if we wanted to do anything on the vehicle. The result was Diane successfully sponsored Craig Kaston and me into the official media contingent and we got to see the ABL up-close and personal for the first time. Hopefully it will not the last time.

The additional bonuses to the trip were two additional articles I wrote on the Balad walls and on a Thunderbird pilot. I will post those later as they were quite interesting and fun to write about. Plus, it was a nice, unexpected vacation for me (PTO is wonderful). I got to play with airplanes and photography - what could be better?

Sometimes the stars are in alignment and things work out. This trip was definitely one of those times.

One note: a couple of the links cited below no longer work a year after the article was written. Specifically the Missile Defense Agency site no longer carries ABL/ABLT information about the program. The Northrop Grumman link does not work, either, but this address should work for ABL/ABLT company-approved information: http://www.northropgrumman.com/Capabilities/ChemicalHighEnergyLaser/AirborneLaserTestbed.

The decades-long quest to field a directed-energy weapons system saw one avenue close when the YAL-1A Airborne Laser Test Bed (ALTB), formerly known as the Airborne Laser (ABL), made its retirement flight from Edwards AFB, Calif. to the boneyard at Davis-Monthan AFB, Ariz. on Valentine’s Day 2012.

The COIL is an infrared laser created by mixing together gaseous chlorine, molecular iodine, and an aqueous mixture of hydrogen peroxide and potassium hydroxide.  The aqueous mixture reacts to the chlorine creating heat, potassium chloride and excited-state oxygen known as singlet delta oxygen.  When molecular iodine is injected into the gas stream the energy in the oxygen is transferred to the iodine which produces a stimulated emission that lases.

Building on the successful tests of the Boeing NKC-135A Airborne Laser Laboratory (ALL) in the 1980s with its gas-dynamic high-energy laser, the Air Force initiated the ABL Program Definition and Risk Reduction (PDRR) phase in 1996.  The Missile Defense Agency (MDA) took over management of the program in 2001 and began the acquisition and integration of hardware for the next phase shortly thereafter.

The first of a proposed fleet of nine ABL aircraft (two prototypes and seven operational vehicles), designated the YAL-1A by the Air Force, rolled off the line at the Boeing Wichita, KS modification center in 2002.  First flight of the aircraft was on July 18 of that same year.

The YAL-1A was flown to Edwards AFB for instrumentation check-out.  At the same time the COIL began initial tests in a ground based Simulation Integration Lab (SIL) located at the Birk Flight Test Center on Edward’s South Base complex.

The next few years saw the integration and testing of the various targeting and tracking components, including the solid-state Track Illuminator Laser (TILL) and Beam Illuminator Laser (BILL), and the firing of a Surrogate High Energy Laser (SHEL) to validate the onboard systems leading up to the COIL installation in the YAL-1A in 2008.

“First Light” of the COIL during ground tests occurred in September 2008.  “First Light in Flight” followed in August of 2009.

But while a successful validation of the concept and technology, the program was already in demise.  In April 2009 then-Secretary of Defense Robert Gates declared the ABL a costly, operationally unviable system and all follow-on aircraft were subsequently cancelled.  The YAL-1A was no longer viewed as a prototype for a production system, but as a flying test bed.  In an era of fiscal constraint and dwindling budgets, the ALTB was on borrowed time.

With reality looming, the program pressed on.  Kill range expansion tests were conducted throughout 2011 with several intercepts of missile targets achieved.  However, no further targets were engaged long enough to be destroyed.  The ALTB flew its last test mission on October 11, 2011.

Prior to its arrival at Davis-Monthan the YAL-1A had never before been shown in an open public event.  Ironically that would change upon retirement.  Col. Patrick Kumashiro, commander of the 309th Aerospace Maintenance and Regeneration Group (AMARG) decided to place the ALTB on display during the base’s 2012 Open House.

Despite the fact that the aircraft has undergone initial preparation for desert storage and final disposition, it is still an impressive sight.  While this maybe the only official Air Force-sponsored opportunity to see the airplane, negotiations are underway with the adjacent Pima Air and Space Museum to add the YAL-1A to their extensive collection.  If talks are unproductive then the airframe will likely be cut up and scrapped at some point in the not too distant future.

Regardless of its fate, the accomplishments of the ALTB are historic.  As the first aircraft to shoot down ballistic missiles in flight, it has paved the way for future developments in directed energy systems, whether in the air, in space, on land or at sea.  The technical and operational challenges are still huge, but they are less so because of this program.

The MDA maintains a website for its programs, including the ALTB that features a recent timeline of milestone events.  It can be found here: http://www.mda.mil/system/altb.html

This pdf. file has some interesting information on the YAL-1A, including cut-away drawings and internal arrangement views.  It can be found here: http://www.0x4d.net/files/AF1/R11%20Segment%2010.pdf


Northrop Grumman’s public-accessible website offers downloadable pdf. files describing the program, the aircraft, its components and the COIL.  A video of one of the successful intercepts is there as well: http://www.as.northropgrumman.com/products/abl/index.html

Additional photos of the ABLT’s departure from Edwards AFB and arrival at Davis-Monthan AFB can be found here: http://www.edwards.af.mil/photos/mediagallery.asp?galleryID=2532

Tony Chong is a historian, photographer and a contributing editor to airspace. He leads activities in the Aerospace Systems Display Model Shop and works in El Segundo. 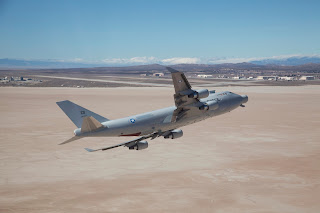 The YAL-1A banks over Rogers Dry Lake as it initiates a low pass over Edwards AFB at the start of its last flight on February 14, 2012.  Photo Credit: U.S. Air Force / Bobbi Zapka.
2) 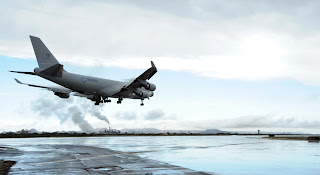 In a somewhat fitting and surreal-looking end, the YAL-1A prepares to touchdown on a rain-slickened Davis-Monthan runway upon completion of its ferry-flight to the boneyard and retirement.  Photo Credit: U.S. Air Force / Airman 1st Class Michael Washburn.
3)

One of the last overall shots of the airplane before processing.  Note the badges on the fuselage just aft of the canopy.  They are the badges for, from left to right, Air Combat Command, Air Material Command and the Missile Defense Agency.  Photo Credit: U.S. Air Force / Airman 1st Class Michael Washburn.
4)

This nose-on shot shows the rotating beam control ball turret in the travel position with the shielded conformal window facing up.  The green and red stripes correlate with the starboard and port sides of the aircraft.  Photo Credit: U.S. Air Force / Airman 1st Class Michael Washburn.
5) 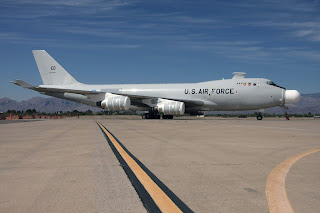 The YAL-1A as it appeared to the media the day before the 2012 Open House.  Processing for final disposition has occurred, with all openings sealed against the environment, including engine inlets and exhaust, gear wells and ball turret.  Photo Credit: Tony Chong, 2012.
6) 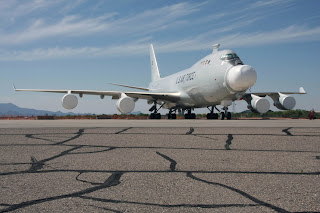 This right front-quarter view shows more clearly the sealed inlets and cocooned ball turret.  The white box at the top of the nose gear is the structure sealing off the gear well.  Photo Credit: Tony Chong, 2012.
7) 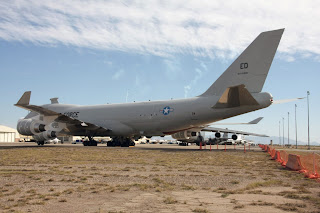 More details of the exhaust cocooning are revealed in this left rear-quarter view.  The protruding belly panel aft of the wing-to-body fairing and forward of the red markings is the PRS Exhaust Fairing.  The non-standard blue in the Star & Bar national marking is of interest as well.  Photo Credit: Tony Chong, 2012.
8) 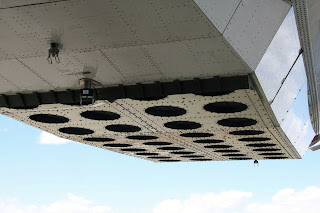 Close-up shot of the Pressure Recovery System (PRS) Exhaust Fairing which is comprised of six units of six exhausts each, corresponding to the six COIL modules inside the fuselage.  The PRS removes the laser exhaust from the aircraft.  Photo Credit: Tony Chong, 2012.
9) 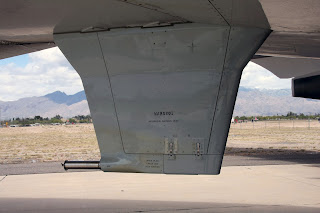 A close-up of one of two emergency chemical dump masts flanking the PRS Exhaust Fairing at its forward end.  Note the relief valve extending aft from the end of the mast.  Photo Credit: Tony Chong, 2012.
10) 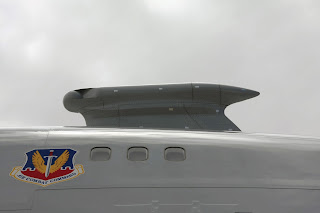 The port view of the Boeing-made Active Ranging System atop the forward fuselage.  The ARS utilizes a modified LANTIRN pod with a high-power CO2 laser.  The ARS acquires the target from the IRST sensor in the chin pod and uses the CO2 laser to find the range to the target.  Photo Credit: Tony Chong, 2012.
11) 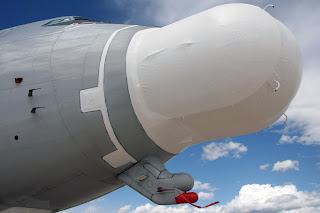 A close-up of the cocooned nose turret.  The chin pod protrudes below.  Photo Credit: Tony Chong, 2012
12) 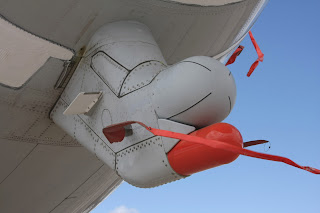 The chin pod consists of a forward-looking Infrared Search and Track (IRST) sensor (lower, red covered ball and cylinder), and a weather radar (gray, upper ball housing).  The rear-looking IRST is in the very tip of the aft fuselage.  Photo Credit: Tony Chong, 2012.
13) 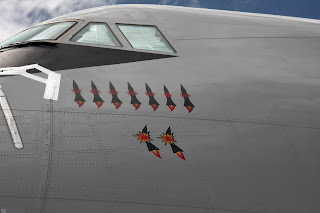 The YAL-1A sports seven successfully targeted (but not destroyed) missile markings, plus two actual kill missile markings under the cockpit on the port side.  The cockpit windows have sun reflectors installed on the inside as part of the boneyard processing.  Photo Credit: Tony Chong, 2012